« Green Beans, a go-to veggie in a low-carb diet | Main | Do you season your salad? If you don't, why not? - Coralville Courier »

It's football season and what better football watching snack is there than nachos?  And no, not the traditional kind made with tortilla chips...... 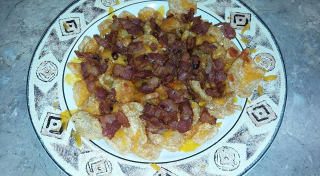 These "Pork Nachos" only have 4 carbs! Also packing 21 grams of protein, let's compare that to a same sized portion of traditional nachos; tortilla chips, ground beef, cheese & jalapeno pepper.... 55 carbs and 19 grams of protein. Both versions of nachos as served have about 600 calories.

If you haven't had pork rinds before or eaten them in awhile, they are very worth your while.

Brown the bacon in a small fry pan over medium heat.  While the bacon is cooking, spread enough pork rinds on a plate to give you one even layer, sprinkle on the cheese.  Microwave the pork rinds and cheese for about a minute, or until the cheese is melted (don't overdo it, pork rinds can get too chewy if you nuke 'em too long).  Option:  I like to put the peppers in with the bacon for about a minute, just before I pull and and de-grease it on a paper towel.  You may want to just sprinkle the peppers on fresh.  Remove the pork rinds and cheese from the microwave, put on the bacon and peppers, dash the Louisiana Hot Sauce to taste and enjoy!

Related:  A replacement for nachos

This is only a preview. Your comment has not yet been posted.

The letters and numbers you entered did not match the image. Please try again.

As a final step before posting your comment, enter the letters and numbers you see in the image below. This prevents automated programs from posting comments.

Having trouble reading this image? View an alternate.

(Name and email address are required. Email address will not be displayed with the comment.)