Pepperoni - it's not just for pizza and subs anymore!

During the course of my Carb-Check diet, I've looked for ways to spice up the menu, a menu that doesn't include very much bread, pasta, or rice.  Pizza is a food I really don't eat much of anymore, but I love pepperoni! 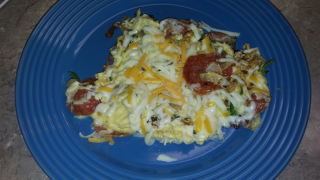 It's a great addition to scrambled eggs.  Saute about one ounce of pepperoni slices in a small pan, let it start to sweat a little bit.  Then add a couple of scrambled eggs, you don't need to add any oil, the pepperoni takes care of that for you.  Options with your scrambled pepperoni eggs include chopped black olive, diced onion, or green pepper (throw such ingredients in when you're sweating the pepperoni).  And yes, we're talking pizza toppings!  Don't forget the cheese!

This scramble delivers a lot of protein to keep you feeling fuller, longer and we're talking less than 500 calories.  Toss the doughnuts aside!

Another idea for pepperoni was suggested by a friend of mine on Facebook.  When you're craving chips and a crunch factor, throw some pepperoni in the oven!

Place pepperoni in a single layer on an un-greased cookie sheet. Bake at 375 degrees for about 8-10 minutes. Remove the pan from the oven and soak up the excess pepperoni oil by patting paper towels against the 'chips'. Return the pan to the oven and bake an additional 2 to 4 minutes to get them chip-like crispy! I tested this out while putting together my pepperoni scramble..... Mmmmm-mmmm!

This is only a preview. Your comment has not yet been posted.

The letters and numbers you entered did not match the image. Please try again.

As a final step before posting your comment, enter the letters and numbers you see in the image below. This prevents automated programs from posting comments.

Having trouble reading this image? View an alternate.

(Name and email address are required. Email address will not be displayed with the comment.)